Expert Engineers in over 85 countries

Founded in 1941, Manderstam International Group (MIGL) offers a full range of consultancy and expert witness services, presenting to the High Court and International Court of Arbitration for high-profile international clients.
contact us to discuss your case

Our work spans numerous countries and continents. We use our intimate knowledge of the oil
and gas, petrochemical, pharmaceutical and manufacturing industries to offer tailored
consultancy services to our clients across the globe.

On the map to the below, please click on the

icons to see more information about
the work done there,

to zoom in to any particular area on the map.

contact us for consultancy
Thanks so much to both of you for all your efforts and hard work for us.
Counsel at Norton Rose Fulbright LLPLondon-October 2017
Thanks for all your hard work on the case over the last year. I was very impressed by your performance under cross examination and in the hot tubbing session. You got the tone absolutely spot-on in terms of explaining your position with authority whilst recognising your obligations to be a neutral expert. The client was also very impressed – which, after all, is the main thing!
Partner at Holman Fenwick Willan LLP,London-December 2017
A belated thank you for all your work over the past 18 months or so. It has been a pleasure to work with you on what has been a demanding case from a technical and forensic perspective and the clients were helped tremendously by your ability to ferret out inconsistencies in the documentation / photos. I hope you enjoyed the experience of giving evidence notwithstanding the attempted attacks on your credibility and independence. We and counsel felt that you did a very good job in the witness box and managed to deal effectively with all the attacks.
Partner at Bird and BirdLondon-April 2017
It has been great working with you and likewise hope we will have the chance to do so again in the future!
Barrister at Gide Loyrette Nouel A.A.R.P.I.Paris, 30 Jan 2017
Thank you so much to you and all your team for all your hard work on your report. We think it is a very good piece of work.
Barrister at Keating ChambersDecember 2016
The work done was to a high standard and the output met our requirements as well as the needs of our legal team.
Manufacturing Operations Director, GW Pharmaceuticals April 2017
A quick note of thanks for your guidance, expertise and patience with us throughout this process. You are a consummate professional and we sincerely appreciate all that you contributed to this effort.
Partner at Freehill Hogan & Mahar LLPNovember 2019
Previous
Next

We have been instructed by most of the leading international and domestic law firms, with experience from well over 60 cases and the provision of oral evidence in over a third of these.
Click to view our Instructions by noted solicitors and insurers

Major Len H. Manderstam was born in Riga in Tsarist Russia, and after a colourful military career he he built up the multi-million pound oil and chemicals consultancy business Manderstam International Group.

He joined the Red Army as a teenager during the Revolution but became anti-Bolshevik. Thrown into the Lubianka, he escaped the firing squad by sheer luck.

After graduating from the University of Riga, he studied at Jena and the Sorbonne and then emigrated to South Africa, where he joined the giant General Mining company.

Recruited to Special Operations Executive (SOE), he went to Angola. There he arranged the capture of a Vichy ship, sabotaged U-Boat fuel supplies and destroyed Nazi sisal stores. Sent to Portugal and Spain, Manderstam’s Memoir he disrupted wolfram supplies to Germany. He was appointed head of SOE’s Russian section and led protests against the forcible repatriation of millions of Soviet prisoners. 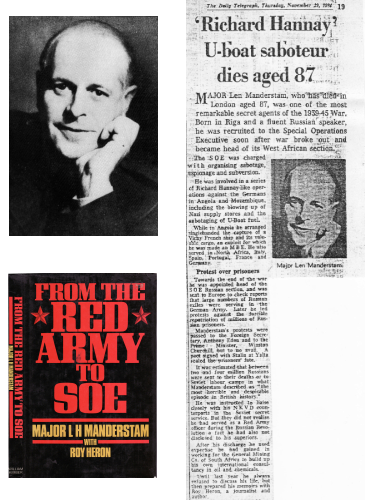 Dive straight into the feedback!Login below and you can start commenting using your own user instantly

Like all of you, we have been closely monitoring the COVID-19 pandemic since its inception in order to respond as necessary. Our priority is the health and wellbeing of all whom we work with and our wider responsibility of serving our clients. To that end we have implemented a robust, well tested plan which enables us to operate at usual capacity and ensure a high quality service: business as usual in other words.

We wish all our clients good health in these challenging times".