Manderstam benchmarking is aimed specifically at hydrocarbon and petrochemical value chain assessment and comparison. On behalf of the Juran Institute we've conducted studies in Canada, USA and Gulf of Mexico to the North Sea, Southern Mediterranean, Caspian Sea and the Middle East. Since 1996 Manderstam has carried out over 150 site surveys of offshore and onshore oil/gas production and processing facilities.

Without exception, leading companies in the oil and gas industry view benchmarking as one of the vital instruments in a continuous improvement program.

Thanks for all your hard work on the case over the last year.

I was very impressed by your performance under cross examination and in the hot tubbing session. You got the tone absolutely spot-on in terms of explaining your position with authority whilst recognising your obligations to be a neutral expert.

I wanted to thank you again for all your help and all the time you put in preparing for the hearing. I know cross-examination isn’t fun, but on the whole I thought you went well and you stood your ground.– I have enjoyed working with you and learning just enough about LPG plants to be dangerous

Thank you so much to you and all your team for all your hard work on your report. We think it is a very good piece of work.

Thanks to everybody for the excellent work done before and during the last intense week.

Manderstam guided the setup of a benchmarking consortium of leading oil and gas companies – including Amoco, BG Transco, BP, Mobil, Philips, Shell, Statoil, and Total – with the Juran Institute.

Scope has ranged from pipelines to marine terminals and refineries, and the consortium has generating multi-million pound savings and benefits such as substantially reduced maintenance manning levels, reduced energy costs, reduction of safety weaknesses and improved budgeting forecasts.

Benchmarking Application In The Oil And Gas Industry

Benchmarking is often used as a management tool in highly competitive industries, where the only controllable way to improve margins is by cutting costs. Initially, improvement and cost saving projects focus on non-competitive processes – areas in which a company loses the battle in the marketplace. Competitive benchmarking reveals these areas of relative weakness. It provides management with an indication of potential savings by establishing performance gaps with the best practitioners, and is instrumental in prioritizing improvement projects. The strength of benchmarking is that it allows decisions to be made based on facts, not intuition. It helps companies that are internally focused and have predominantly reactive approach towards competition to become more proactive and externally oriented.

If we look at the benchmarking from a quality perspective, we can clearly identify it as a quality improvement tool. According to Dr. Juran (1986), the managing for quality is accomplished by the use of three interrelated managerial processes: planning, control, and improvement. The relationship between these processes and the connection with the benchmarking are illustrated in figure 1 below. 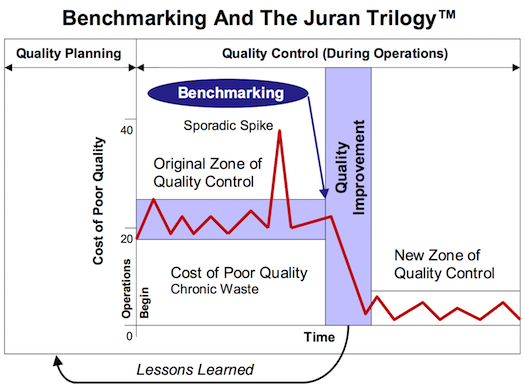 The Juran Trilogy is a graph with time on the horizontal axis and cost of poor quality on the vertical axis. The initial activity is quality planning. The planners determine the customers and their needs, develop product and process designs to respond to those needs, and finally, turn the plans over to the operating forces. The duty of the operating forces, on the other hand, is to run the processes and produce the products. However, as with every process, product deficiencies abound. Most usually, the deficiencies are traceable to the planning process. This waste then becomes chronic because the operating process was planned that way. Under the conventional responsibility patterns the operating forces are unable to get rid of that planned chronic waste. What they do instead is to carry out quality control – to prevent things from getting worse (see the sporadic spike in figure 1). Here the benchmarking becomes critical in identifying the level of chronic waste and providing guidelines for process improvement by looking at the best industry practices. It is the first step in the quality improvement process that is initiated in the planning department. The planers subsequently guide the operational forces into the actual improvement implementation, leading to a reduced level of chronic waste.

It should be noted however, that while the technique is not new, benchmarking is one of the most widely misunderstood improvement approaches around. Benchmarking is neither a momentary glimpse nor a panacea that can be applied without any considerations. Instead, it is an on-going managerial process that needs to be constantly revised and be part of a continuous improvement strategy or total quality management (TQM). Benchmarking is also not industrial tourism, because superficial industrial visits do not assist in the improvement process and it is virtually impossible to acquire detailed knowledge after only a quick glance. ‘Benchmarking should not become a surrogate for action! Those who participate in benchmarking studies and don’t act upon them provoke a double drawback! They are looking in their rear-view mirrors at others which causes a loss of time and in the meantime they don’t see what is happening ahead of them’ (G. Bensen, Statoil, ‘00). Without exception, leading companies in the oil and gas industry view benchmarking as one of the vital instruments in a continuous improvement program.

A benchmarking initiative can be a powerful focus for shaking up management, driving home the facts and convincing the organization of the need to embark on improvement programs backed by appropriate resources. Benchmarking is like a compass that guides companies in the right direction. However, the path that a given company selects should not always be a straight line, but instead should meander depending on the specific company goals and business environment.

The oil and gas industry is a trendsetter in terms of continuous improvement, and is no stranger to benchmarking. In 1995, a group of leading oil and gas companies established a benchmarking consortium under the guidance of Manderstam International Group and the Juran Institute. They were facilities mainly located in the North Sea from global operators such as Amoco, BG Transco, BP, Mobil, Philips, Shell, Statoil, and Total. Since then the benchmarking consortium has evolved by attracting more participants, spreading in different geographical areas, widening the project scopes, and perfecting the performance measurement methodology.

During the years, consortium participants have greatly benefited from their membership in the club. For example, Shell has substantially reduced its maintenance manning levels, NAM has trimmed down its energy costs, Total has recovered a relative competitive weakness in the safety area, Statoil has improved its budgeting forecasts, and BP achieved multi-million savings. Examples are abundant, but what needs to be underlined is that the preservation of sensitive confidential information is paramount. Juran Institute therefore helps the participants by playing the dual role of communicator of ‘anonymous’ information and analyst of process data. The club adheres to guidelines for benchmarking, such as the European Code of Conduct for Benchmarking and the Benchmarking Code of Conduct of the American Productivity & Quality Center. No information is exchanged which infringes local and international regulations regarding for example, open comparisons between participants’ labor costs. The typical benchmarking process consists of seven steps. Their sequence is illustrated in figure 2 below.

The consortium members engage in benchmarking projects with different scopes, ranging from pipelines to marine terminals and refineries. If we consider the Dr. Camp’s benchmarking taxonomy, explained earlier, the majority of the hydrocarbons studies have competitive character. Nevertheless, when the participants are new and unfamiliar with the benchmarking methodology, they usually prefer to start with an internal study. This was the case with Pemex of Mexico, joining the benchmarking consortium in 2003 with 72 facilities, ranging from offshore platforms, marine terminals and gas processing plants through to complete oil refineries and petrochemical complexes.

Currently, an interesting trend is observed in the hydrocarbons industry. There is a shift of focus from an individual asset benchmarking toward a multi-assets benchmarking. The latter is an evolutionary step that reflects the value chain of a company and is firmly supported by BP. Tim Desmond, a BP benchmarking coordinator, states: ‘BP aims at benchmarking “value chains” (for example: well-platform-pipeline-receiving processing terminals-storage and distribution) rather than individual assets, because value chains produce the product for our customer, and that is really what it’s all about. This approach requires a consistent and homogeneous approach for the various assets that altogether form that chain.’ The typical hydrocarbons value chain consists of three main parts: upstream, midstream, and downstream. (See figure 3 below.) The upstream part reflects the initial extraction of hydrocarbons and is represented by the well and platform operations. The midstream section, on the other hand, is mostly related with the oil and gas processing and transportation and therefore incorporates the process terminals, marine terminals (storage & loading) and pipelines. Finally, the downstream part of the value chain takes into consideration the hydrocarbons end users. These are normally refineries; business, governmental, or military clients; and households.

The comparison of the value chain operations is a holistic approach to competitive benchmarking. It provides the full company picture, facilitating organizations to dramatically improve their performance by optimizing all of their assets and resources. Since the decision to participate in such benchmarking initiative is taken in the higher levels of management, the benchmarking commitment is very high within the organization, smoothing the progress of change and leading to an increase in the overall company’s effectiveness and efficiency.

Nevertheless, to be able to realistically compare the various value chain operations, the company’s management needs consistent and reliable methodology. Juran Institute has responded to this challenge by providing to the benchmarking partners a normalization technique that makes “apple-to-apple” comparisons of heterogeneous hydrocarbons facilities. This technique is called Complexity Factor (CF) normalization and is an overall measurement of the complexity of the facility routine operation and maintenance, calculated from the standardised description of its equipment. This is an empirical system that relies on a library of WF (weight factor) values for standard modules of equipment (i.e. loading arms, sumps, oily water treatment, pumps, dew point control units, slug catchers, electrical sub stations, HVAC systems, emergency showdown systems, etc.) In the WF library each module of equipment is given a specific value of WF, based on the aggregate of the worldwide operational and maintenance hours. Each WF value equates to one man year operational and maintenance effort. For each facility, each module of equipment is identified and the arithmetic total of the WF`s gives the final CF score.

Over the years, a high degree of correlation has been identified between the empirical CF system and the number of people employed. Figure 4 provides a proof for this claim by showing the correlation coefficient (R2) between the man (operations and maintenance) hours and the complexity factor.

Finally, it should be pointed out that the CF normalization is suitable for both single-asset and multiple-asset benchmarking. However, the latter is becoming critically important in the rapidly changing hydrocarbons industry.

Benchmarking in the oil and gas industry is a vivid example of how competition and cooperation are not two mutually exclusive terms. It shows that companies can share practices and still stay competitive. We believe that the benchmarking is not only good for the health of a single company but for the industry as a whole. M.Porter (1998), one of the renowned gurus of competitiveness, supports this vision. In his analysis of cluster economies, he states that the exchange of information between the competing companies boosts the overall competitive performance of the cluster. We also have a strong conviction about the integrated value chain approach, because most of the inefficiencies in the organizations are due to the poor coordination between the different business units. The only way to have a true picture of the entire organization is to conduct a value-chain benchmarking. Keeping all in mind, our message is: If you want continuous improvement, stay open to the benchmarking; if you want breakthrough results benchmark your entire value-chain.